Nipah virus (NiV) infection is a newly emerging zoonosis that causes severe disease in both humans and animals. Zoonosis means a disease that can be transmitted to humans from animals.
The natural host of the virus is fruit bats of the Pteropodidae Family, Pteropus genus (fruit-eating species), according to WHO.

Current outbreak situation:
The outbreak is taking place in Kerala, a southern state in India. So far, 10 deaths have been reported, and there are currently at least nine other peoplewho have tested positive for the virus and are quarantined. Multiple people who came into contact with the sick individuals are also under surveillance

How does it spread?
Transmission of Nipah virus to humans may occur after direct contact with infected bats, infected pigs, or from other NiV infected people.

Conversely, person-to-person transmission of Nipah virus in Bangladesh and India is regularly reported. This is most commonly seen in the family and caregivers of Nipah virus-infected patients. Transmission also occurs from direct exposure to infected bats. A common example is consumption of raw date palm sap contaminated with infectious bat excretions.

Infection with Nipah virus is associated with encephalitis (inflammation of the brain). After exposure and an incubation period of 5 to 14 days,illness presents with 3-14 days of fever and headache, followed by drowsiness, disorientation and mental confusion. These signs and symptoms can progress to coma within 24-48 hours. Some patients have a respiratory illness during the early part of their infections, and half of the patients showing severe neurological signs showed also pulmonary signs. 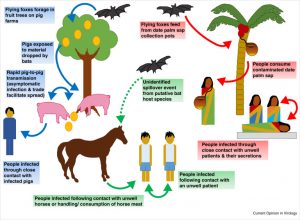 What are the treatments of Nipah virus?

According to WHO, there is no vaccine currently available for either humans or animals and NiV-infected patients are currently limited to supportive care. People have also been cautioned that they should not consume fruits that have fallen on to the ground.
Nipah virus infection can be prevented by avoiding exposure to sick pigs and bats in endemic areas and not drinking raw date palm sap.