Colistin and Polymyxin B testing

Gram-negative bacteria (GNB) resistance is especially concerning due to their rapid spread and limited treatment options, carbapenamase, such as Imipenem and meropenem were often considered as the last resort treatment for nosocomial infections caused by multi-resistant Gram-negative organisms. Hence, resistance to carbapenems in enterobacteriacae are of great concern. Production of carbapenemases, which hydrolyze not only carbapenems but also all other beta lactam antibiotics, is mostly responsible for the resistance to carbapenamases. The most five common carbapenemases include imipenemase (IMP) type, veronica integronmetallo beta lactamases (VIM) type, Klebsiella pneumonia carbapenemase(KPC) type, New Delhi metallo beta lactamases-1 (NDM-1) and also oxacillinase 48 (OXA 48) which is the most common enzyme in Turkey,  Carbapenem-resistant enterobacteriacae (CRE) is usually resistant to all β-lactam agents as well as most other classes of antimicrobial agents such as fluoroquinolones, aminoglycosides, and co-trimoxazole, Infections caused by CRE have high mortality rates due to very limited available treatment options. High dose carbapenem, polymixin B, colistin, tigecycline, fosfomycin or aminoglyside can be called as preferable CRE treatment options. The treatment of serious CRE infections should base on Minimal Inhibitor Concentration (MIC), Colistin, tigecycline and fosfomycin are used as primary treatment options. KPC-producing K. pneumoniae treatment algorithms depend on the site of infection. Colistin is the first option especially in blood, lungs and gastrointestinal tract infections and also preferred for urinary tract infections as a possible therapeutic agent. Tigecycline is the first option in the gastrointestinal tract infections and potential therapeutic agents for the blood and lung infections. Fosfomycin, while a first option for urinary tract infections, is among the agents that may be preferred for other sites of infection. MIC levels of antibiotics are important to adjust the dose for treatment.

In the 1970s, the CLSI published the breakpoints of susceptibility for Colistin and polymyxin B. However, at that time the procedures for standardization of susceptibility testing, the establishment of interpretative breakpoints and the definition of quality control strain guidelines were less rigorous.
In 2007, the CLSI has again provided guidance for the susceptibility testing of polymyxin in non enterobacteriacae. Until 2015, all characterized colistin resistance mechanisms were chromosomally encoded and thus only limited vertical transmission of resistance was envisioned. However, the discovery of the plasmid-borne phosphoethanolamine transferase resistance determinant mcr-1 revealed a mechanism for horizontal spread. MCR-1 and MCR-2, a protein with 80.7% identity to MCR-1, have now been reported in Enterobacteriacae worldwide. In 2017, three additional MCR protein variants have been described, MCR-3, MCR-4 and MCR-5

There are many difficulties in polymyxin susceptibility testing which includes the multicomponent formulation, brand-to-brand/batch-to-batch variation in the composition, cationic properties and synergistic effect with P-80 (tween 80)

Adherence of Colistin and PMB to commonly using laboratory wares, including polystyrene, polypropylene and glass, is one of the major technical issues reported by many investigators. Because of their cationic charge, polymyxin bind to the negative charges of microtitre plates used for BMD. The extent of adsorption depends upon the nature of the plastic and pre-treated laboratory wares, Addition of the surfactant P-80 (also known as Tween 80) used for the preparation of BMD panels prevents binding of polymyxins to microtitre plates

The CLSI guidelines include breakpoints for Colistin and PolymixinB  for Pseudomonas and Acinetobacter spp. but not for enterobacteriacae. In addition, an interpretative breakpoint for Polymixin B is not available in the EUCAST guidelines 2018 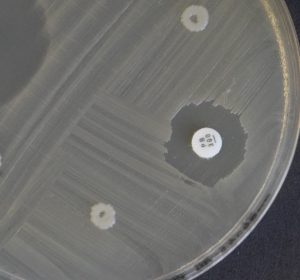