Malaria is a serious, sometimes fatal disease resulting from infection with Plasmodium spp. transmitted by the bite of Anopheline mosquitoes.. The clinical diagnosis, where malaria is suspected based on the history, symptoms and clinical findings must always be confirmed by a laboratory diagnosis.
Laboratory diagnosis of malaria involves identification of malaria parasite or its antigens/products in the blood of the patient.

Microscopy is gold standard for laboratory confirmation of malaria. A drop of the patient’s blood is collected by fingerprick, or from a larger venous blood specimen. It is then spread on a glass slide (blood smear), dipped in a reagent that stains the malaria parasites (Giemsa stain), and examined under a microscope at a 1000-fold magnification. Malaria parasites are recognizable by their physical features and by the appearance of the red blood cells that they have infected..

Microscopy is an established, relatively simple technique that is familiar to most laboratorians.

In many developing countries, microscopy is not reliable because the microscopists are insufficiently trained and supervised and are overworked, the microscopes and reagents are of poor quality, and often the supply of electricity is unreliable. Conversely in non-endemic countries, laboratory technicians are often unfamiliar with malaria and may miss the parasites.

Complete knowledge of the morphological features of the different blood stages of the different Plasmodia species represents the essential basis of a correct laboratory diagnosis confirmation of malaria infection. It is to be stressed that a correct diagnosis may be done only after attentive and careful observation of a number of microscopic fields (at least 100 microscopic fields should be observed before a thick film may be classed as negative) and of a number of different morphologic characteristics that draw a well defined picture of the species. Do not rely on single images, even if apparently pathognomonic. A crescent-shaped gametocyte in peripheral blood does not obligatorily mean that a P. falciparum infection is the cause of the actual clinical complaint and, however, does not rule out the possibility of mixed infection.

Table 1. Morphological features of the different stages of Plasmodia by species in stained thin blood films

The determination of the number of circulating parasites is exceedingly important for clinical purposes to monitor the evolution of the disease and the efficacy of therapy.

In addition to microscopy, other methods have been developed recently for detection of malaria parasites. Parasite antigens and other products can be detected by rapid “dipstick” tests, and parasite DNA can be detected by polymerase chain reaction (PCR). PCR is currently the most accurate test and can identify low levels of infection not detectable by other methods.
Serology detects antibodies against malaria parasites. Such antibodies are produced by the immune response of the infected person and can persist in the blood for several months after the infection is over. Thus, serology measures a person’s past experience with malaria, but does not necessarily detect current infections.
While microscopy is a routine test, PCR and serology can be performed only in specialized reference laboratories.

Various test kits are available to detect antigens derived from malaria parasites. Such immunologic (“immunochromatographic”) tests most often use a dipstick or cassette format, and provide results in 2-15 minutes. These “Rapid Diagnostic Tests” (RDTs) offer a useful alternative to microscopy in situations where reliable microscopic diagnosis is not available. Malaria RDTs are currently used in some clinical settings and programs. However, before malaria RDTs can be widely adopted, several issues remain to be addressed, including improving their accuracy; lowering their cost; and ensuring their adequate performance under adverse field conditions.
Currently RDTs are only approved for use by hospital and commercial laboratories, not by individual clinicians or by patients themselves. It is recommended that all RDTs are followed-up with microscopy to confirm the results and if positive, to quantify the proportion of red blood cells that are infected. The use of this RDT may decrease the amount of time that it takes to determine that a patient is infected with malaria.

Malaria Rapid Diagnostic Tests (RDTs) assist in the diagnosis of malaria by detecting evidence of malaria parasites in human. Malaria RDTs, also known as Dipsticks or Malaria Rapid Diagnostic Devices (MRDDs), have potential to greatly improve the quality of management of malaria infections in these areas when the main alternative form of diagnosis, high quality microscopy, is not readily available. RDTs are an alternative to diagnosis based on clinical grounds or microscopy. Variations occur between malaria RDT products, though the principles of the tests are similar. Malaria RDTs detect specific antigens (proteins) produced by malaria parasites, that are present in the blood of infected or recently infected individuals. Some RDTs can detect only one species (Plasmodium falciparum), some also detect other species of the parasite (P. vivax, P. malariae and P. ovale).

RDTs are lateral flow ‘immuno-chromatographic’ antigen-detection tests, which rely on the capture of dye-labeled antibodies to produce a visible band on a strip of nitro-cellulose. With malaria RDTs, the dye-labeled antibody first binds to a parasite antigen, and the resultant complex is captured on the strip by a band of bound antibody, forming a visible line (test line). A control line gives information on the integrity of the antibody-dye conjugate, but does not confirm the ability to detect parasite antigen.
The first step of the test procedure involves mixing the patient’s blood with a lyzing agent in a test strip or well. This raptures the red blood cells, releasing more parasite protein. Labeled antibody, either in the well or on the strip, may then bind with the target protein (antigen). The resulting mixture of blood products and antigen-labeled antibody complex then passes along the nitro-cellulose strip. This is facilitated partly by capillary action through the fiber-mesh of the strip, and partly by flushing with a fluid buffer placed behind the blood. It passes over the test and control bands. The free, labeled antibody will capture the parasite antigen if present which will in turn be captured by the test-band antibody. The accumulation of microscopic dye particles on the thin band produces a visible line if sufficient antigen-labeled antibody complex is present. The control band will become visible as sufficient labeled antibody accumulates on the line. Antibodies (or antigen) bounds to the strip captures labeled antibodies which failed to bond to antigen from the patient’s blood. A visible control line indicates that labeled antibody has traversed the full length of the strip, past the test line, and that at least some free antibody remains conjugated to the dye and that some of the capturing properties of the antibodies remain intact. The intensity of the test band will vary with the amount of antigen present, at least at low parasite densities (antigen concentration), as this will determine the amount of dye particles which will accumulate on the line. The control band intensity may decrease at higher parasite densities, as much of the labeled antibody will have been captured by the test band before reaching the control.

High quality malaria microscopy is not always immediately available in every clinical setting where patients might seek medical attention. Although this practice is discouraged, many healthcare settings either save blood samples for malaria microscopy until a qualified person is available to perform the test, or send the blood samples to commercial or reference laboratories. These practices have resulted in long delays in diagnosis. The laboratories associated with these healthcare settings may now use an RDT to more rapidly determine if their patients are infected with malaria.

The use of the RDT does not eliminate the need for malaria microscopy. The RDT may not be able to detect some infections with lower numbers of malaria parasites circulating in the patient’s bloodstream. Also, there is insufficient data available to determine the ability of this test to detect the 2 less common species of malaria, P. ovale and P. malariae. Therefore all negative RDT’s must be followed by microscopy to confirm the result.
In addition, all positive RDTs should also be followed by microscopy. The currently approved RDT detects 2 different malaria antigens; one is specific for P. falciparum and the other is found in all 4 human species of malaria. Thus, microscopy is needed to determine the species of malaria that was detected by the RDT. In addition, microscopy is needed to quantify the proportion of red blood cells that are infected, which is an important prognostic indicator.

Parasite nucleic acids are detected using polymerase chain reaction (PCR). This technique is more accurate than microscopy. However, it is expensive, and requires a specialized laboratory (even though technical advances will likely result in field-operated PCR machines).

Malaria antibody detection is performed using the indirect fluorescent antibody (IFA) test. The IFA procedure can be used to determine if a patient has been infected with Plasmodium spp. Because of the time required for development of antibody and also the persistence of antibodies, serologic testing is not practical for routine diagnosis of acute malaria. However, antibody detection may be useful for:

Species-specific testing is available for the four human species: P. falciparum, P. vivax, P. malariae, and P. ovale. Cross reactions often occur between Plasmodium species and Babesia species. Blood stage Plasmodium species schizonts (meronts) are used as antigen. The patient’s serum is exposed to the organisms; homologous antibody, if present, attaches to the antigen, forming an antigen-antibody (Ag-Ab) complex. Fluorescein-labeled anti-human antibody is then added, which attaches to the patient’s malaria-specific antibodies. When examined with a fluorescence microscope, a positive reaction is when the parasites fluoresce an apple green color.
Enzyme immunoassays have also been employed as a tool to screen blood donors, but have limited sensitivity due to use of only Plasmodium falciparum antigen instead of antigens of all four human species.

Drug resistance tests are performed in specialized laboratories to assess the susceptibility to antimalarial compounds of parasites collected from a specific patient. Two main laboratory methods are available:

There are 4 basic methods for testing malaria for drug resistance: in vivo tests, in vitro tests, molecular characterization, and animal models. Of these, only the first 3 are routinely done.
In vivo tests: In these tests, patients with clinical malaria are given a treatment dose of an antimalarial drug under observation and are monitored over time for either failure to clear parasites or for reappearance of parasites.
In vitro tests: In these tests, blood samples from malaria patients are obtained and the malaria parasites are exposed to different concentrations of antimalarial drugs in the laboratory. Some methods call for adaptation of parasites to culture first, while others put blood directly from patients into the test system.
Molecular characterization: For some drugs (chloroquine, SP and similar drugs, atovaquone), molecular markers have been identified that confer resistance. Molecular techniques, such as polymerase chain reaction (PCR) or gene sequencing can identify these markers in blood taken from malaria-infected patients. 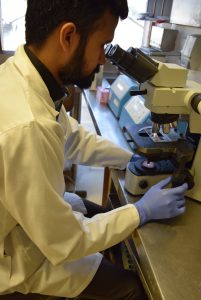