Infections with extended spectrum beta lactamase (ESBL) producing enterobacteriaceae are a serious serious concern in Pakistan. Carbapenems are treatment of choice for these infections. Unfortunately resistance to carbapenems in enterobacteriaceae is also emerging. This resistance is difficult to detect by routine disc diffusion method used by many laboratories in Pakistan. Most of the time this is due to carpapenemase production and detection of this enzyme could be confirmed by Modified Hodge test as recommended by CLSI 2009. This test is a phenotypic confirmatory test for enterobacteriaceae showing elevated MICs for carbapenems

MHT Positive test has a clover leaf-like indentation of the E.coli 25922 growing along the test organism growth streak within the disk diffusion zone indicates that this isolate is producing a carbapenemase.

MHT Negative test has no growth of the E.coli 25922 along the test organism growth streak within the disc diffusion indicates that this isolate is not producing a carbapenemase. 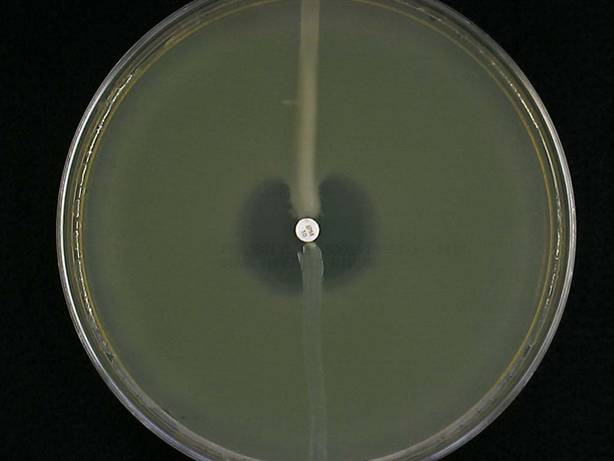